A Weekend Crossing to Majorca 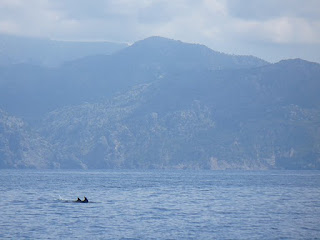 This past weekend I was invited to sail with some friends to Porto de Soller on Majorca's northwest coast. From Vilassar de Dalt, the island lies due south of us at about 120 nautical miles. I have read and heard several times that on a clear day it is possible to see Majorca from the higher peaks of the Maresme. Walking in the mountains above Vilassar I often take binoculars but still I have never seen the island. Presumably some of the clouds that we can see from our apartment when we look south hang over Majorca. The island had remained unseen but its presence is somehow felt.

There were ten boats from Premia de Mar's Club Nautic that were to make the trip together. We were late getting away on Friday evening. One of the crew, Paul who is chronically late but seems completely oblivious to the consternation this causes amongst family, friends and colleagues, did not show until about quarter to eight. We should have left much earlier, the plan being that the slower boats leave an hour or so before the bigger and faster boats. Tony's boat a 31-footer should have left first. Some of the other boats in the "Premia flotilla" were 46-footers.

Unfortunately, the wind was on the nose and it remained so all the way. From Premia de Mar the course to Soller is almost due south. We steered, or rather the autopilot steered about 175 degrees true. Of course with the wind on the nose our speed was going to be slow. The distance to be covered port to port was 118 nautical miles.

For dinner that evening Sev had made an enpannada a typical Galician dish, essentially a large pocket of bread stuffed with meat, vegetables and eggs. Micheal, and his 11-year old son John, brought a large tomato salad, the ingredients coming from their garden.

The seas were a little confused and there was a bit of hobby-horsing into the head sea but it was not uncomfortable. I was a little worried about my sea legs but I had no trouble. After midnight we split into shifts of two hours and the time went quickly. The night passage was uneventful, except for having to steer round a slow moving trawler, there was little of consequence.

Tony made up breakfast of fried eggs and bacon. It has been a long time since I've had that combination. After the previous evening's dinner and then breakfast we seemed to be eating our way to Majorca.

Micheal and John came to fish and fish they did. Not long after breakfast they had their first strike. With Tony's coaching Micheal reeled in the fish, a tuna of about 6 kilograms. Tony demonstrated his ability with spear, knife and axe and the fish was quickly cut down to size. And a couple of hours later we lunched on it.

There were a couple of lost fish in the afternoon all hooked by Micheal. Our host had no bites on his line.

From mid-day Saturday the high mountains that form the long ridge along Majorca's north coast gradually sharpened into view. The upper peaks were, however, streaked with clouds. The coast is wild and stark. Steep slopes and sheer cliffs fall into the sea.

As we neared Soller we crossed a school of dolphins at right angles to our course. We followed them for a bit and some did come to the boat but they were mostly intent on following their own way and they soon disappeared.

The approaches to Majorca are easy with no outlying hazards and we motored right up to the entrance to Soller. The harbour itself is hidden behind the cliffs and mountains and only a few houses and the two lighthouses either side of the entrance give it away from seaward. Once inside you find a circular basin surrounded by mountains. There is an anchorage facing the mouth of the harbour that must be uncomfortable in a north wind and swell. There is a beach of sorts most of the way around the harbour. It was packed with people and plenty were swimming too.We had reservations at the municipal marina. The dock attendant spoke to us in the strongly accented Catalan of the islands.

There were a number of boats flying the red ensign and a smaller number of French-flagged boats. After mooring we went to find the other boats from Premia. Soller is a tourist town. Lots of restaurants and gift shops catering to the trade. There is a small commercial fishing fleet. There is also a small naval base but there were no vessels present. One of the books we have here at home written by an American who cruised these waters in the 1950s says that there were submarines stationed in Soller.

One of the interesting features of the Port de Soller is the tram line that runs along the rim of the harbour. The town of Soller is actually some distance inland from the port. The tram line is a century old and was built to take the fishermen home to the town proper.

The Premia flotilla had reservations for dinner at one of the restaurants facing the harbour. There were 30 people at our table. I was unable to do justice to the meal as we had already eaten so much just getting to Majorca. The owner asked if there was something wrong with the meal. And I apologized for not finishing it. He noted my accent and thought that I was French. He himself was from Normandy.


Short on sleep during the crossing the crew was in bed by mid-night and most asleep as heads hit their respective pillows. In the morning we took the tram into the town of Soller. The locals get to ride for free but the tourists have to pay four euros each way for the privilege. Perhaps Barcelona's transit system could be run on a similar basis. The town is not so tourist focused and that was nice. There is also a rail connection from Soller to Palma on a narrow-gauge railway. The equipment is splendidly maintained, as if in a museum, but very old.

We left for the trip back to Premia around three, we had a pause for a swim and by four we were heading back for good. There were several interruptions to the trip because of the fishing. The wind was again mostly on the nose but at times were were able to get some extra speed with the main and genoa both flying.

We did set a record with one fish. From the time it was caught to the moment it was served for dinner I estimated that less than 45 minutes had elapsed. We ate our way back to Premia.

Again an uneventful crossing back home. There was some wind that had clocked around so that the sails did actually contribute to the effort but we kept the engine on most of the time. We arrived back in Premia de Mar by three o'clock on Monday afternoon.
Posted by Xavier Macia at 12:49 No comments: