A Castle in Spain


Those who indulge in absentminded daydreaming are sometimes accused of dreaming of castles in Spain. I do not know why daydreamers would favour Spanish castles over, say, Scottish castles. Of course the weather is better in Spain. Perhaps it is a matter of numbers and the expression arose because there are so many castles in Spain and thus there are more of them to dream about. When we had the opportunity to move to Spain a few years ago I certainly was not thinking, or dreaming, of castles but perhaps my wife was. I should ask her if she was absentmindedly daydreaming. In any case it was by chance that we found ourselves in Vilassar de Dalt living next door to one of the oldest and best preserved castles in Catalonia or Spain for that matter.

Vilassar de Dalt is a small town tucked into a fold of the Serrelada Litoral, a low range of mountains stretching northeast along the Catalan coast from Barcelona. Until I had the offer of a job in the town I had never heard of it. When we left for Spain we still knew very little about the town. Would Vilassar be a friendly town? Would we like living there? Could we find a place to live?

Arriving at Barcelona’s airport on a day in September, tired from the overnight flight, we were overwhelmed by the Mediterranean heat and light. As the taxi drove us from the airport through Barcelona and past the sprawling harbour we wondered just where we would end up. Once on the other side of Barcelona the highway cuts across Badalona, Catalonia’s third city in terms of population but perhaps its most dismal example of urban planning. The apartment towers, decorated with drying laundry, crowding the highway filled each of us with dread. What if we ended up living in one of those places? We were all relieved to leave Badalona behind. Eventually the taxi left the highway and started climbing the lower slopes of the Serralada. Vilassar turned out to be a surprise, a pleasant surprise.

The oldest part of Vilassar is characterised by narrow and steep streets. The centre of the town is the Placa de la Adjuntament, three kilometres from the sea, where the town hall and the church face each other. The old town coincides with the abrupt change in slope between the coastal plain and the steeper flanks of the mountain itself. Vilassar is separated from the sea by the highway, a strip of agricultural land and along the coast a strip of urbanization that runs continuously from Barcelona to Mataro.

Our arrival was a few days before Catalonia’s national holiday and so after I had presented myself at my new employer’s premises we had a four-day long weekend to settle in. We found a room at a local pension in the old part of town, basic but comfortable and clean. The following day we set out to explore the town with the objective of finding an apartment as quickly as possible.

At the first real estate office we asked, the agent was not encouraging; she had no rentals but suggested we try another agent. Although it was only ten o´clock in the morning it was already hot and as the four of us trudged up the steep streets of Vilassar we wondered at our prospects. The office of the second estate agent was just uphill from the church. A young man of about thirty let us in and we presented our case. We had just arrived in Spain, I had a job in Vilassar and we needed, we wanted an apartment in town, preferably in the old part. Our hopes lowered when Jordi, the young man, warned us that there were normally few rentals in the centre of Vilassar but that he had one listing.

The apartment was not more than fifty steps from Jordi’s office up a side street. The three-bedroom apartment was on the third floor. Despite Jordi’s warning it was a comfortable apartment. What sold me was the view of the Mediterranean from the living room window. There was a balcony that ran the width of the living room and the adjacent bedroom. The other two bedrooms and the kitchen faced a sort of courtyard at the rear that was shared with several other buildings. And, the apartment had access to the terrace on the next floor up. The view from the terrace was even better. One could look out over the roofs of the lower town and in the distance take in a wide sweep of the sea. Close by in the foreground stood the bell tower and steeple of the church. The view was framed on either side by outlying ridges of the Serralada.

The view in the opposite direction from the sea was not as interesting. Standing over the various bits of the nearest buildings was a quartet of disused water tanks and beyond a line of cypress trees. The closely spaced trees effectively blocked the view toward the mountain. I asked Jordi what was behind the trees. He reacted as if I should know. “It’s the castle of the Marques,” Jordi said. My surprise was complete. “A castle, really?” That settled it; we took take the apartment and we had not even seen the castle. 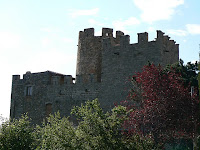 It was a couple of days before we had a proper look at Vilassar´s castle, or rather caught some glimpses of it. From the narrow streets of the town it is impossible to see anything more than its upper parts. Vilassar castle is not large but its picture prefect aspect conjures images of brave knights jousting and chivalrous deeds done. A little research into its history soon dispells such thoughts. During its almost thousand years of existence nothing much has happened around the castle. Unlike other parts of Spain the Muslim occupation of Catalonia was relatively short and in the immediate environs of Vilassar it was even briefer. Vilassar castle never suffered a great siege. The most martial function of castle occurred after the 16th century when Muslim pirates roamed the Catalan coast and its towers served as maritime lookouts. While nearby coastal towns suffered pirate raids the castle itself remained untouched.

Vilassar castle origins are obscure but already in the 10th century a cylindrical watch tower and some adjacent structures coinciding with the present building were in place. Judging from the location of the castle, on a sort of ridge between two intermittent watercourses, there were likely previous structures, perhaps a Visigoth castle or a Roman villa, on the same site as the castle. Late in the 13th century a square tower was added. It was about this time when the function of Vilassar castle changed from that of a fortress to a palace.

The castle was originally in the hands of the Sant Vincenc family, lords of Burriac the fuedal masters of this area of the Maresme. Vilassar castle and Burriac castle in nearby Cabera de Mar were both held by the Sant Vincenc family. Burriac castle is now a picturesque ruin. The death of Berenguer de Sant Vincenc in 1352 without an heir led to the sale of the castle to Pere des Bosc family. In the 15th century the castle passed into hands of the crown even though the des Bosc family continued to live there until the 18th century when the family seems to disappear. In 1704 Vilassar castle passed to marques de Moia de la Torre family.

The castle acquired, more or less, its present appearance during the 14th and 15th centuries under the des Boscs. The appearance of Vilassar castle, more palace than fortress, saved it from destruction during the reign of Philip V. Since the 19th century the castle has been the property of the Marques de Santa Maria Barbera i la Maresana. In the 1930s Vilassar castle was designated a national monument and the current Marques continues to receive public funds to maintain it. The castle is more than an architectural treasure as it also houses valuable archives. The archives consist of manuscript collections of several aristocratic Catalan and Spanish families. Some of the documents date from the 11th century according to a group of conservators from the University of Texas. Some of the archives relate to the Catalan mystic, writer and thinker Ramon Llull.

Despite the significance of the castle and its archives and the public funds that maintain both, the castle remains the private residence of the Marques and his family. This situation does not please the locals, few of whom have ever even been inside the enclosing wall much less entered the castle itself. Later when we got to know the mayor I asked if he had ever been inside--once many years before he said. The marques does maintain the castle and its important archives. He has not turned it into a carnival attraction or into a parador and that is something to be commended. 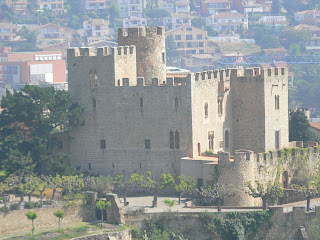 The best views of the castle and the grounds surrounding it are from the mountains around Vilassar. A favourite view of it is from a slope just to the east of the castle overlooking some vineyards. The castle grounds also include three or four acres of vineyards. The grapes are sent to the nearby town of Alella to be used for making wine of the smallest DOs (Denominacio d´Origen) in Spain.

The castle broods over Vilassar especially at night. The perimeter wall around the castle grounds crowds the narrow streets. In the evenings when I walk the dog and the wind blows off the mountain rustling the almond trees and bougainvillea overhanging the castle’s walls spirits seem to be about. Sometimes there is the scent of honey suckle. Bats flint about in the pools of light round the street lamps. From a certain spot on the street next to the perimeter wall the upper part of the castle is visible including a window high up on the wall. Usually the window is dark but sometimes there is a light signalling that someone is home. As we stroll past the main gate the marques’ dogs bark at my dog. Some nights the sound of an owl on the castle grounds drifts through our open bedroom window. We may never see the inside of it but it is our castle in Spain.
Posted by Xavier Macia at 21:24 1 comment: