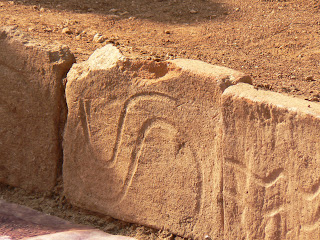 At about eleven o’clock on a Sunday morning in October a couple of hundred people are gathered on a patch of level ground on the southern extremity of Vilassar de Dalt. The area of bare red earth looks like a construction site with red and white caution tape strung across different parts of what will be an athletic field including an oval running track. In fact it is a construction site but for now it is also an archaeological site. The crowd has gathered to examine the remains of several Roman-era graves and storage silos that were found in what will be the infield of the track. The tour is under the guidance of a group of professional archaeologists and volunteers from Can Banus, Vilassar’s municipal museum.

The site is located on the lower slopes of Vilassar about a kilometre above the autopista, the toll highway that runs parallel to the coast. To the north and uphill from the site sits the new public school built to accommodate Vilassar’s growing number of children. The school was built on what was once Vilassar’s old football pitch. The new athletic field is being built on the same site as the old track. During our first winter in Vilassar when early nightfall kept me from running on the mountain I used to run on the old track. During the last two winters I have had to find other places to run during the hours of darkness. Construction in Spain is very slow. Now completion of the new track is likely in the next few months.

From an archaeological point of view the site is interesting because it combines elements of a necropolis with evidence of past agricultural activity. According to our guides the remains of about 30 people have been found including several children. Some of the skeletal remains seem to have been placed in previously existing graves indicating that the site was used as a burial ground over a long period of time perhaps three or four centuries. Testing to ascertain the age of the various human remains has still to be completed.

The agricultural remains include several sitges, in-ground silos for the storage of grain. Several other silos were especially prepared to store liquids such as wine and olive oil. The remains of a furnace for the firing of ceramics have also been identified along with several pit pits where very likely clay was taken out of the ground.

That archaeological remains have been found on the site is not surprising. About fifty years ago some human remains also dating from the Roman era were found under the old football pitch, now under the new school. And, during the construction of the new school work was delayed because still more remains were found.

Vilassar de Dalt’s location must have attracted human settlement from the earliest times. The south facing slopes of the Serralada Litoral, a mountain range of low peaks running parallel to the coast, gently fall away to the Mediterranean which helps to moderate the climate. In Roman times the Maresme, as this area of Catalonia is called, was famous as a source of wine, much of it exported to Rome. Many retired soldiers were given land and settled in the area. The indigenous Iberic population seems to have been easily and willingly Romanized.

Most of the crowd that has shown for the tour up is made up of familiar faces. The political core of the town is represented by the mayor, those who want to be mayor and most of the municipal councillors. The citizenry that has turned up is made of a hard core of Vilassarophiles who tend to show up at these civic events. My wife and I call them the usual suspects. These people have a strong sense of pride in their town, revel in its history and value its sense of community. They care about what goes on. The families of most of these people have been linked to Vilassar de Dalt for several generations. They have known each other all of their lives. Most grew up and went to school together. Now they perhaps commute to work in Barcelona or Mataro but for all of them Vilassar is home. The mayor once told us that at least half of the working age people living in Vilassar actually work in the town itself. That is because Vilassar unlike most of the small towns that straddle the flanks of the Serralada Litoral has both a diverse industrial base and a significant amount of agricultural activity. It is a place to live and work in.

It is nothing new because even in Roman times the area that is now Vilassar boasted a diverse economic base that mixed agriculture and, surprisingly, some important manufacturing. The year before on another guided visit arranged by the municipal museum we viewed the excavation of a Roman villa located very close to the autopista. The villa was the centre of a large farm. And the remains of the villa are under what is still used as agricultural land. In Roman times the Maresme, as this area of Catalonia is called, was famous as a source of wine, much of it exported to Rome.

Vilassar de Dalt’s most public, possibly most important, archaeological remains are Els Forns Romans, the Roman Ovens. This is group of three ovens that were used to fire ceramic objects for everyday use such as amphora, containers and roofing tile. The ovens were found in an area of Vilassar that had always been known as the Fornaca. Some sort of historical memory had kept the name Fornaca alive for most of two millennium without anyone knowing why. When the ovens were discovered about twenty years ago they were thought to be unique and important enough that a special effort was made to preserve them. A stone and steel structure now protects the ovens from the elements while allowing public access to view them. The ceramics produced by the ovens of the Fornaca would have been sold to the surrounding farms, homesteads and towns. Presumably, the local wines would have been sent to the centre of the empire shipped in amphora made in Vilassar.

The Romans arrived in the Iberian peninsula in 218 B.C. when their army landed in Empuries near the present-day French border, in response to a threat from Carthage during the Second Punic War. The Roman army marched south along the Catalan coast to face the Carthagians south of the Ebro River. Along the way they would had marched past the narrow coastal plain between Vilassar and the Mediterranean. Although it took the Romans a century to completely occupy the peninsula the Maresme area of Catalonia quickly became an important part of the empire. The Via Augusta provided a land link with Rome. In the region of the Maresme the Via Augusta split into two routes, one on either side of the Serrelada Litoral. The coastal branch cut across the southern part of modern day Vilassar de Dalt. Both the excavated Roman villa and the ovens of the Fornaca would have been a few minutes walk from the Via Augusta.

We viewed the remains of several skeletons. The in-ground silos had had their tops broken but their bases seemed to still be intact. Afterwards we were all served drinks, chips and olives. Standing around under the mid-day sun we chatted with acquaintances and friends. After a while the heat got to be too much. Fortunately, it was a short walk home.
Posted by Xavier Macia at 20:08